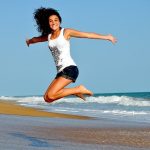 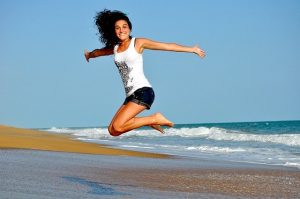 Let’s face it, 2020 was a bad year for everyone, with cancelled holidays, visits and get-togethers, when life in general seemed to be on hold. With the roll-out of vaccines, we can all hope that 2021 will be a big improvement – especially if you are considering visiting France, or buying your dream holiday home in France.

There is so much that is good about life in France that even a pandemic can’t change – from its beautiful and varied scenery, studded with picturesque villages and elegant towns, to its wonderful markets and produce, terrific restaurants and delicious wines – such things are woven into the fabric of everyday French life, and will always survive for us to enjoy.

So to cheer ourselves all up, let’s remember all the reasons that make France such a pleasure to visit or live in – even when times are tough.

The Hexagon, as France is affectionately known, is blessed with such a variety of scenery that there really is the perfect location for everyone within its borders.

Mountain-lovers can choose between the Alps and the Pyrénées, both of which are studded with charming mountain villages and enjoy access to some of Europe’s best skiing. In Haute-Savoie, Mont Blanc, at 4,810 meters, is Europe’s highest mountain peak, always covered in snow. Around it are many popular ski stations, including Chamonix, a major base for skiing and winter activities.

Further south in the Hautes-Alpes department you can even combine a morning of skiing with an afternoon lazing on the beach, with three popular ski stations just 1 ½ hours’ drive from the coast.

Down on the Spanish border, the Pyrénées mountains offer some challenging and exciting skiing in resorts full mostly of locals, rather than international crowds. The largest ski domain is Barèges, a 14th Century French village with a large ski area on its doorstep, and the highest is Superbagnères, at 2260 metres. 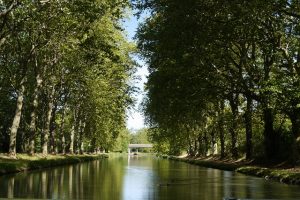 For those who prefer gentle river and canal trips, France has plenty on offer, in particular the Canal du Midi, a 240 km canal that runs between Toulouse and either Narbonne or Sete on the Mediterranean. At Toulouse it connects with the 193 km long Canal de Garonne to form the Canal des Deux Mers, which links the Atlantic to the Mediterranean.

Of all France’s wonderful rivers, the five main ones are: 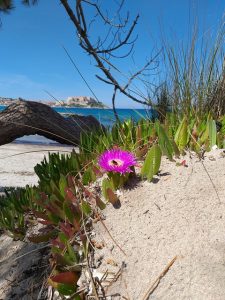 As if mountain ranges, rivers and canals weren’t enough, France also has three very different coastlines. The Manche, or English Channel, provides Normandy with pristine sandy beaches and glorious seafood. Brittany, which also faces out onto the Atlantic Ocean, has a more rugged coastline studded with quaint fishing villages.

France’s beautiful Atlantic coast is made up of hugely varied landscapes, from the salt marshes in the north to pine forests in the south, and boasts an almost unbroken line of sandy beaches, which, with large waves coming in from the ocean, are popular with surfers.

To the south lies the Mediterranean, with its glamorous resorts and chic towns. To the west Perpignan is the gateway to Spain, to the east Menton ushers you into Italy. 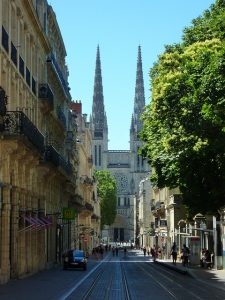 Paris is world-famous for its romance, elegant architecture and beautiful bridges stretching across the Seine, but France has so many other wonderful cities, each offering its own, distinct identity.

Among them, Bordeaux is a sophisticated city of wide boulevards, paved medieval streets, large squares full of cafés and restaurants, and attractive architecture. Lyon is the capital of gastronomy with incredible markets, but it’s also an important cultural and historical centre. On the French Riviera, Nice, Antibes and Cannes combine glamour, sunshine and art, while to the west, the thriving university city of Toulouse has an attractive historic centre and is home to a prosperous aerospace industry. 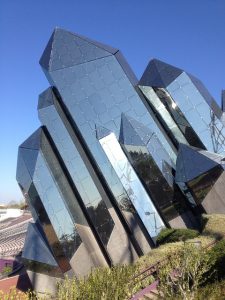 France will never stop surprising us, which is all part of its charm. For a country steeped in history, it still prides itself on looking forward, as two hugely popular world-class attractions will testify: on the edge of Toulouse is the Cité de l’Espace, which combines modern 3D cinema space experiences with genuine examples of spacecraft. Another is Futuroscope, near Poitiers in Vienne, a futuristic family theme park that uses some of the world’s most advanced technology to create dramatic and thrilling rides.

As for the old, where to start? France is so packed with important historical sites it’s impossible to do them all justice, but two outstanding examples are Normandy’s Mont St Michel that rises out of the sea like a magical palace, and Carcassonne, in Aude, a beautiful walled city and warren of narrow, winding cobblestone lanes and charming houses. 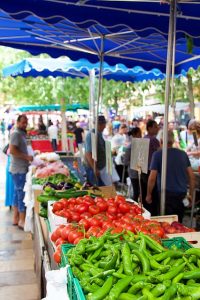 Wherever you live in France, you can always rely on one thing – its colourful, vibrant markets. In some areas you’ll be lucky enough to find a different market for every day of the week, quite possibly including a flea market for those quirky, one-off home accessories. Markets are the perfect place to try new cheeses and saucisson, some ready-made quiches and tarts, and probably the best poulet roti you’ll ever taste. Don’t forget all the wonderful locally-produced fruit and vegetables on offer too.

Even local high streets will contain hidden speciality gems, from local cheeses and delicacies to refined chocolates and patisseries, and the simplest village bakeries will sell all kinds of delicious fresh bread, croissants and treats to tempt you.

You don’t need to be a millionaire to eat well in France, either – some of the best food can be found in the simplest of village restaurants, whose owners still pride themselves on producing traditional cuisine, made with great care and using seasonal local produce. Many restaurants still offer a special lunchtime formule which can often mean two or three surprisingly good courses, sometimes even including wine, for not much more than the price of a takeaway pizza. But for that special blow-out, no-one does stunning restaurants better than France, often coming with glorious views, exquisite interiors and, of course, incredible food served with flair and flourish.

The French pride themselves on being the world’s greatest maker of fine wines, producing some 7-8 billion bottles a year. With so many regions producing so many different wines, it could take years to become a true connoisseur – a challenge doubtless many would relish taking up! Yet French wines don’t have to be expensive either, with many great value wines on the market, and for those who like a bit of fizz but can’t run to Champagne prices, most wine-producing regions offer their own Crémants, or sparkling wines, as a more affordable alternative.

Lovers of rolling hills and charming villages are spoilt for choice, as much of France is still idyllically rural, and there are still many wonderful properties to be found in hidden villages all over the country. If you don’t mind doing some work, there are still bargains to be found, from cosy village houses to spacious barn conversions. Whether you’re looking for country farm houses and manors or elegant sea-view villas, for mountain chalets or smart town houses – France will have a property for you.

There is still so much to enjoy about France, so why not use these quieter times to research which area might best work for you? There’s still plenty of time to plan a visit or to buy a home of your own in France, and to enjoy all the wonderful benefits that France has to offer. So this year, why not try to find your dream home in France, and make that a new year resolution you really will want to keep?!

Search By Ref No / Keyword