In the popular BBC series Rick Stein’s Secret France, the Padstow-based celebrity chef takes a personal road trip around France, from Dieppe to Cassis, meeting restaurateurs and specialist producers, hoping to find that France is still the home of fine food, particularly if you look off the beaten track.

The series is a glorious road trip that will delight foodies and Francophiles alike, taking in some of France’s breathtaking scenery, picturesque towns and villages and, of course, its lovely restaurants.

We learn that these days, the French are lacking in time to prepare and enjoy their food, which is why their cuisine is said to be in decline, and Stein himself admits to having one or two really disappointing meals during his travels. But it is still possible, as he joyfully discovers, to find artisans who care deeply about their produce, and unassuming restaurants which totally punch above their culinary weight.

His style is chatty but authoritative – he clearly knows his food and wine and is passionate about both. He has no airs and graces, and is as happy eating with staff in a back room as he is in a Michelin-star establishment. Not only do we get to explore the cuisines of each area he visits, but we get to see some key places of interest, and of course, to enjoy all the wonderful scenery.

Stein arrives in Dieppe, a working town with a healthy fishing industry, and follows his nose to find wonderful fresh seafood in an unassuming back street bistro. Here, he indulges in salt baked turbot with cep mushrooms fried in butter, shallots and garlic, washed down with a glass of cider. After a bracing swim, he visits a cafe frequented by Oscar Wilde, and heads to a one Michelin-star hilltop restaurant which could be easily overlooked, but which serves sensational food – the fish of the day is John Dory with asparagus and mashed pink potato in a light shellfish sauce.

In Normandy, at the formal French seaside resort of Le Crotoy, he indulges in a large platter of fruits de mer, and goes foraging for sea asters, which he enjoys later in a new potato salad.

In the ancient city of Troyes, with its narrow streets and half-timbered buildings, he admires the produce in a indoor market – if you’re feeling glum, he advises, take a swim or visit a food market.

At his final stop he indulges in some artisan charcuterie in the form of an award-winning andouillette, a coarse-grained sausage made with pork or veal intestines and Champagne, and watches it being prepared by hand, poached and then fried in butter. Not to everyone’s taste, but definitely something he enjoys. 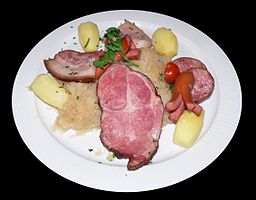 In search of hearty mountain food, Stein heads to Itterswiller, south west of Strasbourg, and tries a traditional regional dish of choucroute garnie – fermented cabbage cooked with sausages, salted meats and charcuterie. He meets a game hunter who produces game sausages, pies, terrines and smoked hams, and enjoys some wild boar stew over a glass of Pinot Noir.

At a winery, he tries some bio-dynamically made Pinot Gris with a dish of duck confit and green lentil salad, before continuing his wine trail to the beautiful mountains and lakes of Jura in search of the famous Vin Jaune and Vin de Paille. On the Swiss border he heads to a restaurant popular among locals, and enjoys cote de boeuf cooked over a large open fire.

This area is also famous for its Comté cheese, and at the Restaurant du Fromage, Stein manages to work his way through eight cheese-based courses, from omelette to raclette, with a highlight of boned leg of chicken stuffed with mushrooms and Comté in a morel sauce.

Rick Stein compares Burgundy, one of the world’s most famous wine producing regions, to the Cotswolds, thanks to its beautiful countryside and wonderful driving roads.

At the traditional weekly cattle market at St Christophe en Brionnais, he indulges in the most typical of French lunches – steak frites. His next stop is in Auvergne, where he visits a double decker bus that travels around serving up Michelin star quality food, where he tries the langoustine risotto with mountain garlic and a reduced langoustine shell sauce.

In Trizac, he visits a local butchers’ shop which produces a terrine of coarse pork meat, prune and chard, and finally enjoys a loin of lamb with a Charlottine of courgettes, cream and Parmesan, at the restaurant Les Maison de Concasty.

Here’s a list of properties for sale in Burgundy and Auvernge. 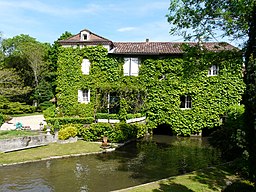 Stein shares his love of the Périgord region, thanks to its vast forests and foodie highlights of black truffles, walnuts and confit duck. At the Saturday market at Périgueux he delights in the fresh local produce, before doing a spot of fishing on the River Dordogne. At a waterside café in the village of Creysse, lunch includes freshwater crayfish, fried eels with persillade, grilled catfish on skewers and fried minnows.

At the village of Tremolat Stein enjoys a homely garlic soup ladled over stale sour dough, before heading to the Moulin de la Veyssiere near Neuvic, where walnut oil is produced. It’s a popular ingredient in the region, which he enjoys drizzled over a haricot bean and confit pork skin stew.

In Allemans, Stein enjoys an unusual French and Middle Eastern fusion dish of Fatteh salad with confit duck, which he considers perfect to be enjoyed al fresco with some chilled wine.

South of Roussillon he finds a laid-back Catalan influence and wonderful fresh seafood, and heads to Les Poissonerie Café, where he indulges in a fruits de mer of raw mussels, clams, cockles, and sea urchins over some Côtes Catalanes wine.

Here’s a list of properties for sale in Dordogne.

Stein arrives in the south of France and visits the Domaine Pietri-Geraud vineyard to learn about Banyuls – a fortified apéritif or dessert wine made from old vines in the Roussillon area. He sits down to eat with the workers, enjoying a Catalan feast of sausages and snails with a garlicky aioli.

He then travels to the seaside town of Collioure to visit the historic bar ‘Les Templiers’ – famed for its artwork by Picasso and Dufy, who, as struggling artists, paid for their food and drink with their paintings.

As he drives through the majestic scenery of the Pyrenean foothills, he stops off at Eus, reputed to be the sunniest village in France, where fruit trees are abundant, and buys a hunk of Brebis cheese in the 9th century Benedictine Abbey gift shop.

In a decidedly untrendy little auberge, he enjoys a late Sunday lunch of Cochon Grillé, or grilled pork chop, served with figs, mushrooms and a bacon-dressed salad. His last stop is in Leucate, known for its award-winning oysters, which he declares to taste like diving into sea water, with a creamy and sweet flavour, best served au naturel, with neither lemon juice nor vinaigrette.

We have a large selection of properties for sale in the Languedoc-Roussillon region.

At Le Pistou Cooking School in Uzès, Stein tries a favourite regional speciality, Brandade de Nimes, an emulsion of salt cod, garlic olive oil and cream, before enjoying seafood stew at a bistro that celebrates local products with international flavours. His last stop is at La Nougatine Patisserie for a sweet treat of Tartelette Figure, or fig and frangipane tart.

He heads to Marseille’s North African Quarter, where he enjoys a lunch of lamb couscous, and in nearby Cassis discovers a recipe for lamb chorba, an Algerian stew flavoured with ras-el-hanout spices, harissa and coriander.

His final restaurant stop is Le Bistrot du Paradou near Arles, where he chats to his friend and Dire Straits bassist John Illsley over a soupe au pistou and a roast poulet de Bresse.

Here you can find our properties for sale in the ever popular Provence region.

In between visits, from his kitchen in Haute Provence, Rick cooks dishes for himself and the crew that are inspired by these travels, and these recipes have been brought together in a spin-off cook book, also called Rick Stein’s Secret France.

France is one of Rick Stein’s favourite places in the world, and happily, he ends his travels impressed, having successfully found plenty of memorable food in unexpected places, just as he’d hoped to. The series oozes charm and is enough to make any viewer want to jump in their car, head to France, and seek out wonderful places to eat, and perhaps, even, to live.