Think of French celebrities and certain names will probably come to mind: Brigitte Bardot, Catherine Deneuve, Jean Reno, Vanessa Paradis and Gerard Depardieu among them. While these are most certainly iconic, there are numerous television personalities, singers and actors who are hugely famous in France today, but little known outside.

If you are seriously considering moving to France, knowing a bit about French celebrities and gossip will not only help you chat with friends and neighbours, it will also make life in France feel more like home.

Here, then, is a handy guide to ten of the most popular celebrities in France today:

A hugely popular TV presenter on France 2, where she started out as a weather girl, Bordeaux-born Sophie Davant can be seen every afternoon presenting Affaire Conclue, in which participants get their antiques assessed by specialists before going to auction.

For several years she presented both C’est au Programme, a morning magazine programme, and the afternoon Toute une Histoire, which focused on real life social issues, making her one of France’s busiest and most visible TV personalities.

Sophie is also the go-to presenter for any major live productions, such as the annual Téléthon. She is greatly loved for her edgy blonde hair style, her warmth, quick wit and risqué sense of humour.

It’s hard to imagine where French TV would be without the effervescent and hugely popular, openly-gay Stéphane Bern. They turn to him for any programme involving France’s history, cultural heritage and beautiful villages. He is also a go-to presenter for any grand, special occasions, such as New Year’s Eve concerts or royal weddings.

Not only does he have an extraordinary portfolio of series and accompanying books to his name, he has also created his own heritage foundation, and in 2017 was asked by President Emmanuel Macron to identify the heritage sites in France most in need of financial support.

His fascination with history and heritage extends to the UK, where he has presented specials on the royal family and Clarence House, and in 2013 was even awarded an honorary MBE by the Queen for services to UK/French cultural relations.

This talented young singer, born Jenifer Bartoli in 1982, has enjoyed a stratospheric career since winning the first season of Star Academy France in 2002. The most successful of winners by a long way, she’s had a string of hit singles, four studio and two live albums, and for several years was a coach on the popular hit show The Voice.

Her love-life has been the source of much tabloid fodder, and she has two sons, one by her former producer Maxim Nucci and another by actor Thierry Neuvic. In August 2019 she married Corsican businessman Ambroise Fieschi, and has since spoken of her intention to take a career break and focus on her family life for a while. 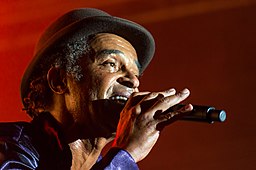 Tennis fans may remember Yannick Noah for winning the French Open in 1983, but since retiring from the sport he has enjoyed a highly successful career as a singer and performer. He has released eight albums, performed at Bob Geldof’s Live 8 concert in 2005, and in 2009 headlined a Central Park concert as part of France’s global music celebration Fête de la Musique.

He has been married twice and has five children, the fifth with his current girlfriend Isabelle Camus, the daughter of the late rocker Johnny Hallyday’s longtime producer. For tax reasons they live in the US, but despite this, Yannick remains one of France’s favourite celebrities.

This glamorous Slovakian model who was a favourite choice of designers Thierry Mugler, Givenchy, Karl Lagerfeld and Lanvin, has been a constant presence on French TV since her marriage to former French footballer Christian Karembou. They divorced in 2012, but thanks to her natural charm and impeccable French, she has been a judge on the Top Model reality show and was a contestant on the first season of Danse Avec Les Stars, France’s version of Strictly Come Dancing. She is a regular on talk shows and at star-studded events.

The former flame of Mick Hucknell, Karembou married Armenian businessman Aram Ohanian in a celebrity-packed 2014 Marrakesh wedding, and can today be seen on TV co-presenting Les Pouvoirs Extraordinaires du Corps Humain, about the human body and its capabilities, with charismatic TV doctor Michel Cymes. Rumours persist about their obvious rapport, but Karembou insists they are merely co-presenters and great friends.

This French-Moroccan comedian and actor has been credited with bringing the American stand-up style to France. Much of his material reflects on his early life in Morocco, and in 2007 he was voted the ‘funniest man of the year’ by TF1 viewers, with his fifth one-man show selling no fewer than one million tickets.

He has starred in several feature films, including a small role in Woody Allen’s Midnight in Paris, and has performed in English throughout the United States, first in 2015 with a stand-up show Oh My Gad, and then with a 2019 Netflix show Huge in France.

In 2011 he hit the gossip jackpot by dating Princess Caroline of Monaco’s daughter, Charlotte Casiraghi, with whom he fathered a son. They are no longer together.

France’s favourite actress, Sophie Marceau has enjoyed an award-winning career, working alongside such acting greats as Jean-Paul Belmondo and Gerard Depardieu. Best known internationally for appearing in 1995’s Braveheart and the 1999 James Bond film The World Is Not Enough, these days she is also a director, screenwriter and author. Her largely autobiographical film, Parlez-Moi d’Amour, (Speak to me of Love) won her the best director award at the Montreal World Film Festival in 2002.

She and her first husband, the late Polish director Andrzej Żuławski, were together for 17 years, despite a 26-year age gap, and they had a son. She went on to have a daughter by producer Jim Lemley, and was in a seven year relationship with actor Christopher Lambert. Today she lives with celebrity chef Cyril Lignac.

One of France’s most recognised actors internationally, thanks to his 2011 Oscar-winning performance in The Artist, Dujardin is also best buddies with George Clooney, starring in his 2014 movie The Monuments Men and even a Nespresso advert together.

After starting out as a stand-up comedian, Dujardin became famous for the daily TV sitcom Un Gars, Une Fille, in which he played one half of a couple alongside actress Alexandra Lamy. As real life mimicked art, they started dating and were married, but separated four years later. He is now married to former ice skater Nathalie Péchalat.

Recently the father-of-three has been in hot water over his support for controversial director Roman Polanski, having starred in his latest film J’accuse (An Officer and A Spy).

This Lyon-born comedian and actress is a firm favourite on French TV, much loved for her title role in the fantasy drama series Joséphine, Ange Gardien. Born with achondroplasia, she stands at just 1.32 m tall, but what she lacks in height she more than makes up for with her warmth, big heart and mischievous sense of humour. Her character, a guardian angel, uses magical powers to help others, and the series is a charming way of exploring modern social issues. An enormous success, it has just finished its 20th season, and in 2010 she was voted France’s favourite female personality.

In 2005 she married celebrity chef and wine maker Benoist Gérard, and they live in Provence. She has joked that she was lucky to marry late, in her 40s, just as all her friends were getting divorced.

The French tend to revere their grizzled rock stars – no ‘wrinkly rocker’ jokes for them, as the outpouring of grief at Johnny Hallyday’s death showed. One such grizzled star is Florent Pagny, now 58, who has sold over 15 million records during a long and very successful career. Between 2012 and 2018 he garnered a new set of fans as a judge on The Voice, coaching two of the show’s ultimate winners.

Pagny is no stranger to scandal, however. In the late 80s he caused outrage by dating the then 15 year old Vanessa Paradis, when he was 26. He is currently the target of internet criticism for having recorded a song, along with fellow rockers Pascal Obispo and Marc Lavoine, in honour of France’s care-workers, with even his most die-hard fans angry at his move to Portugal to avoid paying tax in France.

So there you have it, some of France’s biggest names in a nutshell, handy to drop whenever you want to impress your French neighbours and friends. Don’t forget, watching French TV and following its media are great ways to improve your language skills, too, and let’s face it, who doesn’t love a bit of celebrity gossip?