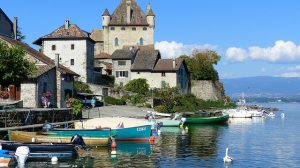 While many flock to France’s beautiful coasts for holidays of sun, sea and sand, their very popularity has also made them expensive and busy. For all the beauty of a water view without the bustle, lakes make for a stunning alternative. Unlike Italy or Switzerland, France isn’t particularly known for its lakes, but there are in fact around 350, many of which can be found in the Auvergne, the French Alps, the Pyrénées and the Vosges mountains.

The following are some of the largest and most popular lakes in France:

Bordering France and Switzerland, the northernmost part in Switzerland is called the Lac de Genève, while the southernmost part in France is called the Lac Léman. Here, several spa towns and resorts can be found along its banks, including the historic spa resort Thonon-les-Bains, which also boasts a 17th-century château, and the pretty Belle Epoque spa resort of Evian-les-Bains. The village of Yvoire is on the list of Les Plus Beaux Villages de France thanks to its attractive port, stately medieval castle and pretty stone houses with flower-filled balconies.

Encircled by forested mountain peaks, the Lac d’Annecy boasts majestic castles and pretty villages along its shores, as well as the picture-perfect medieval town of Annecy, known as the Venice of the Alps. Said to be Europe’s cleanest lake, it’s ideal for swimming and water sports, such as sailing, canoeing, kayaking and paddle-boarding.

France’s deepest lake, the Lac du Bourget in the Savoie Mont Blanc region of the French Alps is surrounded by densely wooded hillsides, and overlooked by Aix-les-Bains, an internationally renowned Belle Epoque spa town. Today’s visitors can still enjoy spa treatments, but there are also several beaches along its shores, ideal for swimming, boating and other water sports, as well as biking and hiking. Also on its banks are the Château de Châtillon and the Château de Bourdeau, which once hosted Queen Victoria and is now a hotel and restaurant.

A highlight of northeastern France’s Lorraine region, the glacial Lac de Gérardmer is the largest lake in the Vosges Mountains, which lies some 660m above sea level. Among the activities on offer are sailing, canoeing, hiking, mountain biking and horseback riding, with some six km of trails.

Nestled in the mountains on the French and Spanish border, the Lac de Gaube is one of the highlights of the Pyrénées. Reflected in its crystalline waters is the Pic du Vignemale, the highest peak of the Pyrénées Mountains. Its inaccessibility has made it one of France’s most tranquil lakes – it takes an hour-long hike to get there from the Pont d’Espagne near the spa and ski resort town of Cauterets.

Surrounded by the gently rolling Côtes de Meuse, or Meuse Hills, the Lac de Madine is at the heart of the Parc Naturel Régional de Lorraine and borders the departments of Meurthe-et-Moselle and Meuse. It is both a wildlife reserve and a recreational area, with hiking trails, cycling paths and a sandy beach making it a favourite summertime destination.

Originally part of the Verdon River, this artificial lake – France’s third largest – was created in 1973 within the Parc Naturel Régional du Verdon, near the Gorges du Verdon canyon. Surrounded by hills and forests, Lac de Sainte-Croix has sandy beaches and is popular for kayaking, sailing and windsurfing.

A nearby attraction is the village of Moustiers-Sainte-Marie, one of the Plus Beaux Villages de France, where houses boasting pastel-painted shutters and red-tiled roofs are clustered together on rocky limestone hillsides. 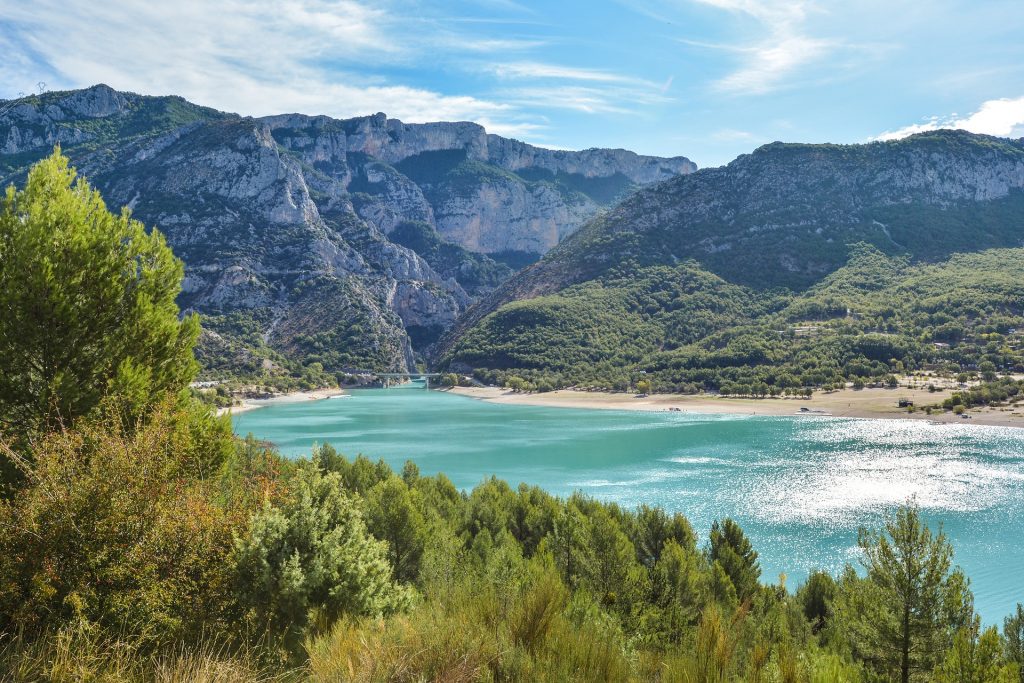 Located in the Champagne region, the Lac du Der was created in 1974 and is a designated Réserve Nationale de Chasse et de Faune Sauvage, or National Hunting and Wildlife Reserve. Here, over 200 bird species thrive, including some endangered and rare species. Bird-watchers can admire swans, white-tailed eagles, goldeneyes and other migratory birds, but swimming, boating and cycling are also on offer, with a bike path around the lake and six sandy beaches.

Tucked away in the Monts Dore volcanic mountains within the Parc Naturel Régional des Volcans d’Auvergne, the deep blue crater Lac de Guery is loved for its rugged high-altitude setting, surrounded by volcanic mountains and lush forests. Nature lovers, outdoor enthusiasts and anyone seeking solitude and serenity will appreciate this breathtaking and unspoiled natural environment.

This artificial reservoir was created in the Languedoc when the Salagou River was dammed in the 1960s. Surrounded by hills, its blue water contrasts attractively with the area’s reddish orange soil. Visitors can hike or cycle around the lake, while it’s also become a popular destination for naturists.

Another artificial lake and one of Europe’s largest, the Lac de Serre-Ponçon was created in the 1960s as part of a flood control project. Surrounded by craggy mountains and gentle hills, it’s popular with swimmers, windsurfers and sailing enthusiasts.

If you are considering buying a home in France and love to be near water, a lake may be an ideal alternative to one of France’s busy and more expensive coastlines. As well as being a dream for nature lovers, France’s lakes are well set up with family-friendly attractions, making them ideal settings for both a home and perhaps a gite business.