There is little more uplifting than visiting a beautiful garden, especially after a long, dull winter. France has a well established history for formal chateau style gardens around Paris and the Loire Valley, but is full of other surprises, too, such as a bamboo garden in Provence and some stunning hanging gardens in the Dordogne.

Let’s take a look at ten of the most glorious gardens of France. 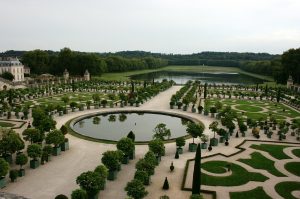 The Gardens at the Palace of Versailles: Paris, Ile de France

Arguably the most famous gardens in the world, commissioned in 1661 by King Louis XIV and created over a period of 40 years by landscape designer André Le Nôtre, the gardens cover 800 hectares, including 300 hectares of forest, and represent the formal French style of gardening, using symmetry, trimmed topiaries, 600 fountains and lushly planted flowerbeds.

Along the Grand Canal lies the Hameau de la Reine (the Queen’s hamlet), which was built as a retreat for Marie Antoinette in 1783 and, as she requested, creates the feeling of being deep in the countryside. More information on the gardens at the Palace of Versailles.

Nestled in the heart of the Bois de Boulogne, the Bagatelle castle and park were built in 1775, following a bet between Marie-Antoinette and her brother-in-law the Count of Artois that a new château could not be built within three months. The Comte won the bet by completing the house and its stunning gardens in a mere 63 days, having employed nearly 800 people to do so. The park offers waterfalls, pretty bridges and a rose garden with 1,200 different varieties.

The chateau is the largest private residence in France and was the blueprint for Versailles – Louis XIV was so jealous over its beauty he sent the owner to prison and stole many items, including several potted orange and lemon trees.

These formal gardens, designed by André Le Nôtre, feature symmetrical, strong lines with flowers and boxwoods laid out in arabesque patterns. There are also a number of surprises throughout the property, including a Grand Canal hidden from the château’s view and numerous fountains. Official website for Château de Vaux le Vicomte 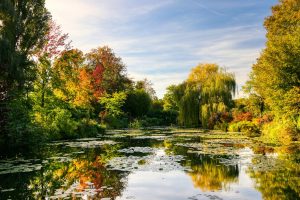 When artist Claude Monet first glimpsed the village of Giverny from the window of a train in 1883, he fell instantly in-love, and the village was to become his home and the centre of inspiration for some of his most famous masterpieces.

He landscaped the gardens himself, creating a flower garden called the “Clos Normand” as well as a Japanese-inspired water garden. Highlights include a wisteria-covered bridge, weeping willows and ponds of water lilies. A living artwork, visiting this garden is said to be like entering one of the artist’s own paintings. The Claude Monet Foundation website

Properties for sale in Lower Normandy 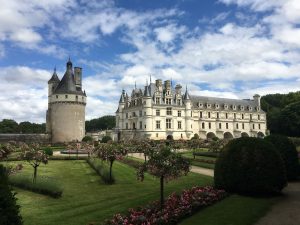 Built on the Cher river, the 16th century Château de Chenonceau is one of the jewels of the Loire Valley and a symbol of Renaissance architecture. Its magical gardens include the climbing roses of the Diane de Poiriers garden, flowering beds of the Catherine de Medicis garden, a circular maze, a flower garden and a green garden. Château de Chenonceau website

The last of the great Renaissance châteaux built on the banks of the Loire River, its gardens are spread over four levels, and include a decorative vegetable garden, an ornamental garden, a water garden, a herb garden, a maze of hornbeams and a sun garden. They are constantly being renewed and replanted, so there is always something new to see. Château de Villandry website

Properties for sale in Centre

Overlooking the Dordogne Valley on a rocky cliff, the Hanging Gardens of Marqueyssac contain over 150,000 meticulously laid boxwood trees sculpted into all kinds of shapes, creating a rolling and flowing effect that blends in with the hilly Dordogne Valley. In the summer, the gardens are lit by thousands of candles and offer spectacular panoramic views of Périgord. Hanging Gardens of Marqueyssac website 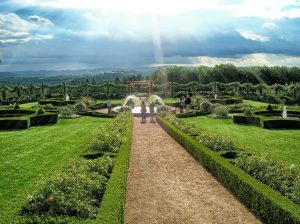 Located eight miles north of Sarlat, Eyrignac Manor has been owned by the same family for 500 years, and boasts seven different gardens. They include the French Garden, the White Garden, with its beautiful fountains and white climbing and ground roses, the Spring Garden and Wild Flower Meadows, the Chinese Pagoda, the Kitchen Garden and Flower Garden, and the Green topiary section containing beautifully sculpted yews, boxes, hornbeams and cypresses, for which Eyrignac is famous. Eyrignac Manor website

Properties for sale in Dordogne

It was established in 1855 by botanist Eugène Mazel as a home for the hundreds of species of bamboo and other rare plants collected during his travels in Asia. Listed as a “Jardin Remarquable et Monument Historique“, it is spread over 12 hectares and is not only unique, but an unexpected change of scenery in the Cévennes Gardoises. Bambouseraie de Prafrance website

Properties for sale in Gard 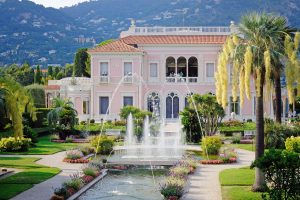 This glorious Belle Epoque villa overlooking the Bay of Villefranche-sur-Mer was built by banker Maurice de Ephrussi for his wife, Béatrice de Rothschild. Its nine themed gardens include Florentine, Spanish, French, exotic, lapidary, Japanese, Provençal, the rose garden and the Garden of Sèvres, with a collection of colonnades, waterfalls, ponds and other flowering beds. Villa Ephrussi website

Properties for sale in Provence