The areas Poitou-Charentes and Aquitaine, on France’s south-western coast, are among the most popular places to live for British expats, with each counting over 16,000 British among their residents. The area has certainly got a lot going for it – from its lengthy coastline and chic towns of La Rochelle and Biarritz, to the UNESCO World Heritage site of Bordeaux and its world-renowned wines, to the Pyrénées mountains in the south and glorious rolling landscapes inland.

Let’s take a closer look at the region, and what kind of lives are people making for themselves there?

Poitue-Charentes comprises four departments, Vienne and the Deux-Sèvres in the north, and Charente and Charente-Maritime in the south. Aquitaine is composed of five departments: Gironde, Landes and Pyrénées-Atlantiques on the coast, Dordogne and Lot-et-Garonne inland.

Since 2016 these two regions, along with Limousin, have formed the new ‘super-region’ Nouvelle-Aquitaine, which geographically is even larger than Austria.

Part of the appeal of this area is the ease of access, with popular low budget carriers operating in Bordeaux, Bergerac and Biarritz in Aquitaine, La Rochelle and Poitiers in Poitou-Charentes.

Poitou-Charentes is renowned for its year-round warm and sunny climate, its beautiful stretch of coast and excellent transport links. Much of its economy is geared towards tourism and agriculture. 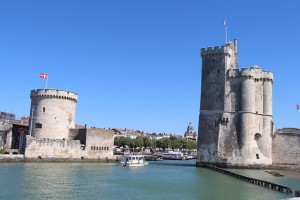 La Rochelle, the capital of Charente-Maritime, with a beautiful old port and medieval town
Ile de Ré, the island accessible by bridge from La Rochelle
Poitiers, the historical city in Vienne
Futuroscope, one of France’s most popular theme and leisure parks near Poitiers
Angouleme in Charente, classified as a French Town of Art and History
Cognac production in Charente
Oyster-farming in Charente-Maritime
Outdoor activities, such as fishing, in Deux-Sèvres
The GR36 pilgrim route to Santiago de Compostela runs through Parthenay and Niort in Deux-Sèvres

While both Charente and Charente-Maritimes have long been popular with expats, their quieter counterparts Vienne and Deux-Sèvres, with their rolling pastureland, woodland, hedges and stone walls, are now beginning to attract foreign residents.

One couple who have made new lives for themselves in Deux-Sèvres are Pamela and Phil Irving. They bought a property ten minutes from Bressuire as a holiday home in 2003 and enjoyed it so much they moved over full time two years later. “There are seasons here,” says Pamela, a reflexology and massage therapist. “The summer can be very warm, and the cold in the winter means you need your woollies. I love that for the contrast, rather being too warm all the time. In spring and autumn the colours are stunning and the skies so blue. There are lots of fresh air outdoor activities as the quiet roads are great for walks and cycling.”

While husband Phil set up a mini digger hire company, Pamela went about creating her own therapy practise, incorporating reflexology, massage, hypnotherapy and reiki. Both worked hard to integrate into local life: “Setting up in business can be daunting, and for us, learning French means we have targeted French people and that has supported our work no end,” she says. “If you have a trade before you arrive it can be easier too if you come over to work here. My massage skills were great, but I struggled to understand my customers in the beginning. My husband loves people and his plant hire business has been helped by getting to know the locals in person at the village meetings rather than relying on the internet. French life is not always easy but it challenges you, and then rewards you if you stick with it!”

Aquitaine is a huge and diverse area which got its name from the Romans due to the abundance of water, or aqua, throughout the landscape. Add to that its 250km of Atlantic coastline with sandy beaches, thriving ports and harbours and it’s not hard to see why it’s so popular.

The city of Bordeaux, now a Unesco World Heritage site rich in riverside medieval architecture
145,000 hectares of vineyards, with arguably the greatest wine-producing region in the world, producing world-renowned wines such as Pétrus and Mouton-Rothschild
Summer oyster festivals on the Bay of Arcachon
200km of Europe’s biggest pine forest in Les Landes
The lively town of Pau with its elegant Belle Epoque architecture and flower-filled parks, as well as the oldest golf club in the area, created in 1856
The stylish resort town of Biarritz, known for its excellent surfing and deep sea fishing
Sarlat, considered one of France’s most beautiful towns, in the Dordogne
Monpazier, the 13th bastide town that’s almost unchanged, in the Dordogne
110km of Pyrenées mountains from the Basque country to Pau.
Périgord black truffles with a January festival, market and even a truffle museum
The beautiful cities of Agen, Arcachon, Bayonne and Bergerac 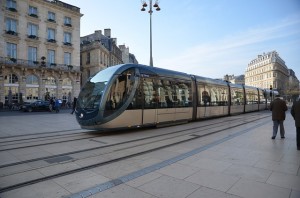 The coastal Gironde department is the largest in France, and is popular with Parisians buying second homes, and so receives a lot of weekend visitors. Dubbed ‘the Paris of the southwest’, Bordeaux has undergone a major rejuvenation in recent years, and has become a foodie heaven, with many of France’s best chefs opening restaurants in the city.

Food is an attraction for Brazilian-born life coach and psychotherapist Giselle Cara, who, having lived and studied in the US and UK, has made the city her home for the last five years. “I love the nature that the region offers,” she says. “Bordeaux is just magical, with a good variety of theatres, bars and restaurants. It’s in this region that we have the best wines in the world. I love French bread and the variety of fresh cheese, meet and vegetables from the lovely markets.’

Les Landes is France’s second largest department, and its pine forest covers two thirds of the area and attracts those looking for an active outdoor life. The Pyrénées-Atlantiques, enjoying both mountains and coast, is said to be the most expensive department in Aquitaine. Popular towns such as Biarritz attract wealthy home-owners, while Pau, situated in the mountains, attracts those who want a more rural, traditional lifestyle. 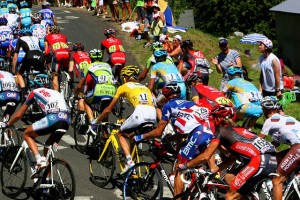 It was the thought of cycling in the mountains that attracted retired electical engineer Dean Matthews, originally from Burnley, who moved to Pau three years ago. “Having followed the Tour de France for several years, being able to cycle in the Pyrénées was a real dream for me,” he explains. “I joined a local cycling club and that’s been a real life-changer, it’s helped me to meet all sorts of people and improved my French no end. I was really nervous about it at first, but everyone’s been really friendly and welcoming.”

Lot-et-Garonne is filled with small villages and activities ranging from hiking to horse riding. Its neighbour, Dordogne, thanks to its beautiful countryside and laid back lifestyle, is extremely popular among the British. As Sue Heyes, Membership Secretary of the Dordogne Ladies Club puts it, “this is a beautiful area to live with a climate full of contrasts, but gentler than the UK.”

How to integrate as an expat?

You’ve found your dream home, your friends and family have all been to visit, but what next? How do you begin to make new friends and create a social life in France for yourself? Even if cycling doesn’t appeal, a very good place to start is by joining a club, and there are plenty of them around. “Most English people moving here welcome the opportunity to experience French food and customs,” says Sue Heyes. “But it’s also valuable to be part of an English-speaking group which can provide friendship and support. The Dordogne Ladies Club International has a membership of over 100 and is an excellent way to settle into this community.”

Giselle Cara agrees that clubs and keeping active are terrific ways to meet people. “As a life coach and psychotherapist I believe that the best way to integrate is to be part of a group and association. Maybe once a week do some volunteer work to help your community; it will help make a better world and you’ll feel good doing it,” she says. “If you’re looking for work, there are lots of agencies looking for English speakers. Study can be also a great idea to develop your projects and your mind. Exercise definitely will boost the level of serotonin into your brain, helping you feel happier and healthier.”

“Let’s not forget the importance of keeping in touch with your family and friends in your good and bad moments,” she continues. “If you believe you do not have many people around you, do not wait for them to come to you, go out and find them to talk with. Most importantly, don’t forget to have lots of fun!”

Property Styles in Poitou-Charentes and Aquitaine

With the region itself being so varied, it’s little wonder that it has many varieties of architectural style.

Unique to the region are Maisons Charentaises, traditional houses that are large and symmetrical, with a cellar and a garden. They are built from wood and stone, and many still have their original stone fireplaces.

Bastide farmhouses are typical in the region, usually fortified with courtyards and outbuildings. They are said to be popular with expats as they are older and filled with character.

Colombage houses are half-timbered mostly found in the towns of Niort, Parthenay and Cognac. Many have been sympathetically renovated, retaining their original features.

Oustau houses can be found in Les Landes, and are usually half-timbered properties built so that the back of the house faces the incoming winds from the Atlantic.

Rétaise houses are found on the Ile de Ré and are stone-built with a traditional French look, complete with painted shutters, white exteriors and exposed stone interior walls. 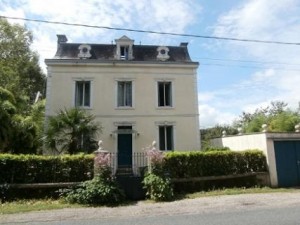 Maisons Basques are built in the style of a rectangular villa and usually coloured red and white. Older versions are made from timber while more recent examples are built from stone.

Chateaux are a feature of the area, although they are not necessarily castles but rather large farmhouses which were fortified with added features such as turrets.

Maisons de Notable and Maisons de Maître usually come with a great deal of land and a number of outbuildings.

Longère houses are one storey houses that are long and rectangular. They usually have outbuildings and large gardens and are a traditional housing style that can be seen all over France.

View property for sale in Poitou-Charentes

View property for sale in Aquitaine 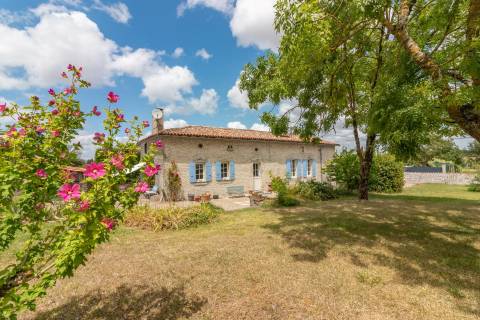 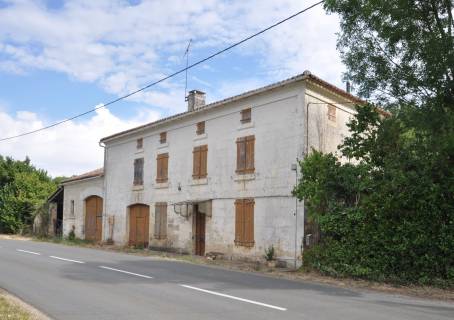