Les Gets is a commune in the Haute-Savoie area of the Rhône-Alpes region in SE France.

Les Gets is situated on a plateau between Samoëns and Morzine, at the western edge of the Portes du Soleil ski area.

Situated in the heart of the Portes du Soleil (14 French / Swiss resorts, 650 km of skiable runs), the Les Gets area also offers “discovery” circuits with the aim of guiding you as far as our Swiss neighbours by using pistes suitable for your own level of skiing.

The ski area consists mainly of blue and red runs (beginner and intermediate level). The resort’s most easily accessible black runs are: ‘Yeti’, accessed via the resort’s slowest chairlift, La Rosta, and Myrtilles accessed by the Grains d’Or Express. Mt. Chery hosts the majority of black runs, also having numerous red runs, with just one blue and no green pistes.

There are several good spots for off-piste skiing and snowboarding, the best of which are; to the sides of ‘Yeti’, the long black run off Mt. Chammossiere and also by taking a short hike from the top of the Ranfoilly lift. the latter has been rated as one of the best off piste powder bowls in Europe. 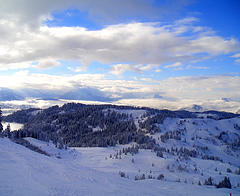 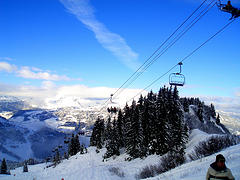