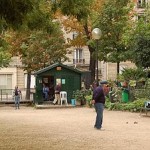 This is not a load of boules! In fact, the World Cup has been taking place in Marseille. Perhaps the other event in Brazil has grabbed more headlines. But over 13,000 players from 20 countries participate.

Boule Lyonnais started in the South of France and evolved into jeu de Petanque. The game was played in villages all over Provence, usually on squares of land in the shade of plane trees.

Here are 10 facts about Pétanque or jeu de Petanque:

1. Ancient Greek origins. The French would have you believe that they invented the game, but the origins of Pétanque can be traced as far back as Ancient Greece when people played games which involved tossing coins and stones. The Ancient Romans then came up with the idea of adding a target – which in the case of the French interpretation of the game is called a “cochonnet” (the literal translation being “piglet” in English). As for the name Pétanque – which is also used in English – it comes from the word “la petanca” in Provençal dialect, deriving from pès tancats or “feet together”.

2. Not just a sport for retired men. Yes, you are more likely to come across elderly men playing the sport but statistics show that more and more women are taking part. In this year’s Pétanque World Cup – in which women have only been allowed to compete since 2002 – a grand total of 456 women are taking part. Today around 14 percent of the sport’s 311,971 registered members in France are women. According to the President of the Ligue Paca, women bring a certain “sensibility” to the sport that the male players lack.

3. One of the best things about Pétanque is that practically anyone can play, regardless of sex or age. Last year, César Brauer competed in the Pétanque World Cup, over fifty years after winning in the first ever World Cup in 1962.

4. The rise of the “bouligans”. The term “Bouliganisme” was coined after numerous stories about rising incivility among French players. In 2007, the newspaper Midi-Libre reported: “Petanque is no longer a convivial sport. It is being undermined by constant incivility, verbal threats and gross insults. The non-respect of sporting rules by some players is driving others away, as well as referees who feel endangered.” The Local France’s story this week about death threats at the World Championships show’s that “Bouliganism” is still afflicting the game.

5. Dangerous sport. Pétanque may be regarded by many as a gentle pastime but it has been known to get out of hand. In 2008 a man in the village of Adé in the Pyrenees was killed by a fellow player’s ball as he was checking how close his own was to the target – the tiny cochonnet ball. In another tragic accident – quite unrelated to the sport – a pensioner was trampled to death by a two-tonne runaway circus elephant as he played the game.

Read more here about the next 5 facts: click here

8. Pétanque has crept its way into the French school system.

10. Olympic ambitions to get the game recognized as an Olympic sport.

How to play Petanque

Pétanque is played by two teams, where each team consists of one, two, or three players. In the singles and doubles games each player has three boules; in triples each player has only two. A coin is tossed to decide which side goes first. The starting team draws a circle on the ground which is 35-50 centimeters in diameter: all players must throw their boules from within this circle, with both feet remaining on the ground. The first player throws the jack 6–10 meters away.

The game continues with a player from the team that won the previous end drawing a new circle around where the jack finished and throwing the jack for a new end.

Play ends, and points may be scored when both teams have no more boules, or when the jack is knocked out of play. The winning team receives one point for each boule that it has closer to the jack than the best-placed boule of the opposition.

If the jack is knocked out of play, no team scores unless only one team has boules left to play. In this case the team with boules receives one point for each that they have to play.

How to pronounce Pétanque

You pronounce it as follows: pay/tah~k (listen to it here) or cheating as “boules”!

Pétanque can be played on an almost flat, open space. The ground may be irregular and interrupted by trees or rocks.

When an area is constructed specifically for the purposes of playing petanque, the playing surface is typically loose gravel, or crushed sea shell.

What is the difference between petanque vs bocce

These two are pretty much the same game, just the Italian (bocce) and French (pétanque) variation also know as jeu de boules. The principal differences are in the number and type of balls used. The rules on setup and scoring are basically identical.

Bocce uses four balls per side and is played by 2 or 4 people. The balls can be plastic, wood, or metal.

Pétanque uses metal balls (boules) only and is designed for two teams of various size.

How to Play Pétanque Video