Grenoble is a city in eastern France that is often missed by first-time travelers to France, but most locals know it as the “capital of the Alps.” Situated right alongside Europe’s premier ski destination, Grenoble enjoys a large share of European tourists annually. However, Grenoble has much more offer than just shops and restaurants for seasonal travelers. Take a look at the Grenoble tourism information below to appreciate the city: 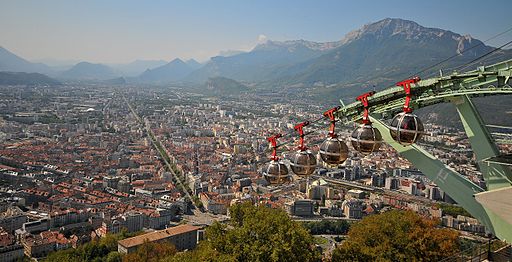 Grenoble’s first came to prominence in the 11th century when it became the capital of Dauphiné, an important French region in the Middle Ages. Although Dauphiné lost most of its autonomy to the French kingdom by the middle of the 1400s, Grenoble was permanently established as the capital of this important region.

Due to its strategic location at the convergence of two rivers and its proximity to the Alps, Grenoble remained fortified for most of its early history. In 1820, a large bastille (fortress) was constructed in Grenoble to defend against possible invaders. This signified Grenoble’s importance as one of France’s key military locations at the time.

In the C20th, Grenoble’s key geographic situation made it a good meeting point for the French Resistance movement, despite France’s occupation by the Nazis in World War II. At war’s conclusion in 1945, (President) Charles de Gaulle dubbed Grenoble the “companion of the liberation” in honour of its role in the Resistance.

Grenoble became a focal point in 1968 when it hosted the winter Olympics; many attribute Grenoble’s rapid transformation into a centre for European technological innovation in the latter part of the 20th century to this event.

By the close of the 20th century, French leaders began to see Grenoble’s potential as a clean energy centre. Mainly due to its proximity to natural hydraulic power from the nearby rivers. Grenoble has continued its tradition of playing an important role in modern France while retaining its special place in history.

Population and Economy of Grenoble

Grenoble remains a small city, with approximately 160,000 permanent residents. However, as a tourist destination in southern France alongside the French Alps, Grenoble enjoys a number of visitors every year.

Economically, Grenoble has flourished as a magnet for technology companies: Established companies and market leaders such as STMicroelectronics and NXP Semiconductors are based in the city alongside France Telecom, CapGemini, Freescale and Xerox. Research organisation Minatec, a huge European nanotechnology research facility, made its home in Grenoble in 2006, immediately establishing the city as a high-tech centre. Also, Grenoble serves as the French headquarters for Hewlett Packard France and Caterpillar, as well as other important French companies, such as Carrefour, the supermarket chain. These corporations are attracted to Grenoble for its relatively low cost of living and proximity to European markets.

Grenoble offers a pleasant, seasonal climate. The average annual temperature is 52 degrees Fahrenheit. With well over 200 days of sunshine each year, Grenoble is an ideal location for a holiday due to its agreeable climate.

Grenoble features a number of interesting sites and attractions to keep visitors and locals entertained:

Although Grenoble is steeped in history, it maintains a rich and modern culture. Most local residents in and around the city are employed by one of the major corporations located in Grenoble, and its annual influx of visitors keeps it vibrant and economically stable.

This brief tour of Grenoble is just the tip of the iceberg when discovering this fascinating French city – why not schedule a visit to check it out for yourself? More about Tourism and Travel to Grenoble below ….

Easyjet, British Airways, Monarch and RyanAir all offer flights to Grenoble from UK airports. You can easily access many ski resorts from Grenoble in the nearby French Alps.

Where Is Grenoble? Grenoble, a city in the Rhône-Alpes region of south-eastern France, sitting at the foot of Alps between the Drac and Isère rivers.

Grenoble cherishes its Dauphiné identity due to its extensive heritage and rich history as described above, and warmly welcomes all visitors, foreign students or expatriates who want to taste the Grenoble life! Tours, maps and Guides from Grenoble Tourist Office

The presence of major international companies in the area has drawn many American, British and other foreign workers to Grenoble.

For long term accommodation in Grenoble – check out location Grenoble

IAE Grenoble occupies a privileged place within the network of management education in France.

Property For Sale In Orne

Stone House with 3 Bedrooms and Outbuildings